DP Daily Prompt: Don’t You Forget About Me

I don’t know about leaving a legacy and what kind of effect I’ll I have on the world. But I can write this much everything starts with a drop for e.g., a drop of water,a grain of sand, a little bit of affection, a kind word can go a long way to build one’s influence on the world.

I remember, I was still a student,my friend Evie was given the opportunity to take over the teaching duties of another classmate who needed time off for her exams. These were three little kids, two boys and one girl,they were siblings. The sister was older so she was a bit more experienced how teachers handle children. I was there to see these kids and how my friend would handle them.The first thing Evie did was she told the kids to sit down in a loud voice. I could see the two brothers frightened, they put their heads on the desk and began to cry. They were not loud.I felt sorry for them,I told my friend she needed to tone down her voice. But my friend thought she knew better and she kept up her attitude. The boys would not lift their heads and continued crying.

I asked my friend if I could try to calm them down,she reluctantly let me try. I spoke as softly as I could,I explained the teacher didn’t mean any harm. They raised their head and wanted me to stay and not leave. Next day the boys wanted me to teach them, I got a job without meaning too.

Then there was a five year old crying for his mother. It was his first day in a boarding school, the matron was not ready to make any allowance for him because of his age. She just treated him as one of the students.

I couldn’t bear to see him so distraught,I took him aside and told him he’s free to come with me and watch what I was doing. It took him only a few days to adjust.

These are a few things I did when I started my job as a teacher. Although I passed my education degree, I do not recall being told how to handle kids.

I mainly taught nine year old kids. I enjoyed teaching them,there were times they’d look at me with the expression ‘you are a teacher, you are not supposed to be happy!’ there was an announcement on the intercom,the school will be closed after noon hours due to the snowstorm. The kids were delighted and were raising their arm and shouting hey, I joined with them,when they saw me suddenly they were quiet, all eyes were on me. One of them said,’but you are a teacher you’re not supposed to be happy?’

I grew up in a family of twelve kids, we enjoyed every minute of growing up. There was a break when my Dad passed away. Things were not the same anymore. We forgot to laugh,have fun.

To me my legacy would be the way I handled my kids for I hope they remember me as a teacher who tried to make things fun for them. Money,furniture all these things are material things  and  they really don’t have much value when compared with affection a kind word, this is what I’d leave behind.

This would be my legacy, small as it may seem now, but I give  a lot of importance to it. 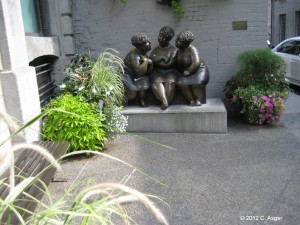 These are three ladies having an interesting conversation.These are statues in front of the building.

42 thoughts on “DP Daily Prompt: Don’t You Forget About Me”