Today’s prompt : construct, reminds me that we all are builders of some sort. We choose professions we either make up our mind to achieve, or if we have someone who wants us to be successful show us the path which according to them would be best for us.

Today I was watching an interview on TV conducted by a Bollywood actor. The actor was Manoj, his father wanted him to study medicine, in his heart he was interested to pursue acting. He wasn’t going to disappoint his father, by not completing his studies. After graduating he wrote to his Dad he was sorry he couldn’t agree to become a doctor. He was interested to pursue acting.

His father replied saying , ‘I’m your father, I sensed what you wanted to become, you showed it early in life by acting in plays. I have no problem with it.’

One of my brothers showed no interest in going to school, he always had problem with his teachers. One day my father asked him,’What would you like to be when you grow up?’ 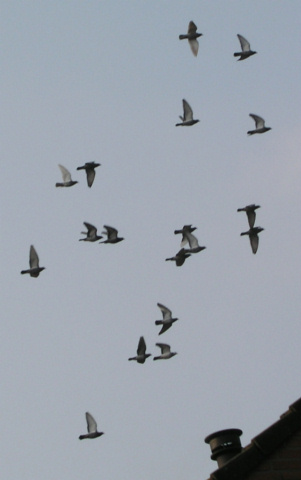 He didn’t know what to say, perhaps at that point he had no ambition. He adopted twenty-five pairs of pigeons, he fed them and watched them most of the time. He had a few pairs of pigeons, they had white feathers all over, but their head had black spots. He discovered they were a special kind, that if he picked one of them at a time and let them fly by clapping both his hands.They would fly higher and higher in the sky until they disappear.

One day he said, ‘Ranu, come I’ll show you what these pigeons can do.’

I watched him take them out from their nest one at a time let them them fly one at a time. The pigeons were flying round and round our house, soon they started flying higher and higher until they looked like bits of paper in the sky. I was afraid I thought, he has lost the pigeons for good, they’ll never come back.

When they almost disappeared he started clapping, I was amazed when I saw the pigeons, they were gradually flying lower and lower until they could land on the roof of our house.

I know this art of teaching the pigeons to fly higher in the sky until they disappear, and bringing them back to earth was a marvelous technique. But this  art did not establish my brother’s career!