We each have many types of love relationships— parents ,children, spouses, friends. And they are not always with people; you may love an animal or a place. Is there a single idea or definition that runs through all the varieties of “love”?

I think love is a very powerful feeling it’s a deep affection for an  animal, place,plant, or people. It’s the kind of feeling you have when you are busy doing something, suddenly you jump up because you realize you did not water your plant, or forgot to feed your cat or failed to call your friend.

In this age of technology there are so many ways of remembering your near and dear ones. If your feeling is not deep enough, you will not run to water that plant or feed your pet, or send an email or call your friend to know how he /she is.

My definition would be a deep rooted feeling for a friend, an animal , a place, a child, spouse or even a plant.

When reading for fun, do you usually choose fiction or non-fiction?  Do you have an idea why you prefer one over the other?

Most of the time fiction helps me relax, provided the story interests me. Recently I  read two books both were fiction,one was about a dog’s journey and the second one was about heart beats.

After reading these two books I felt great, I couldn’t help thinking about the dog, how faithful he was, the other one was the story of two wonderful people, how they met, their affection towards each other was magical.

Next I read a non-fiction, it was about the life of a little boy, how poor his family was, how he managed to get adopted when he was lost. It was amazing to know he was only five years old when he was adopted, was taken to Australia by the couple.

It took him twenty-five years to find his mother and siblings.

The best part is, it was written by the boy himself  after he grew up.I like both fiction and non-fiction.

Are you patriotic? What does being patriotic mean to you?

2. A sense of personal identification with the country.

3. Special concern for the well-being of the country.

4. Willingness to sacrifice to promote the country’s good.

Many think of patriotism as a natural and appropriate expression of attachment to the country in which we were born and raised and of gratitude for the benefits of life on its soil, among its people, and under its laws. They also consider patriotism an important component of our identity.

If someone asks the question,”Are you Patriotic?”

My answer is yes, how do I know I am patriotic, because I feel proud of my country, I am proud to be one of its citizens.

I am sad if my country loses in any competitive games held in the world. I pray for my country to thrive in everything. I’m concerned about its welfare. I am unhappy if someone passes negative comments about my country.

I love living in my country, I have a special affection for it!

We each have many types of love relationships– parents,children, spouses, friends. And they are not always with people; you may love an animal or a place. Is there single idea or definition that runs  through all the varieties of “Love”.

If I were to use a single idea of love for my parents,children, friend,place or an animal,It would be a feeling of strong or constant  affection.

I don’t know about leaving a legacy and what kind of effect I’ll I have on the world. But I can write this much everything starts with a drop for e.g., a drop of water,a grain of sand, a little bit of affection, a kind word can go a long way to build one’s influence on the world.

I remember, I was still a student,my friend Evie was given the opportunity to take over the teaching duties of another classmate who needed time off for her exams. These were three little kids, two boys and one girl,they were siblings. The sister was older so she was a bit more experienced how teachers handle children. I was there to see these kids and how my friend would handle them.The first thing Evie did was she told the kids to sit down in a loud voice. I could see the two brothers frightened, they put their heads on the desk and began to cry. They were not loud.I felt sorry for them,I told my friend she needed to tone down her voice. But my friend thought she knew better and she kept up her attitude. The boys would not lift their heads and continued crying.

I asked my friend if I could try to calm them down,she reluctantly let me try. I spoke as softly as I could,I explained the teacher didn’t mean any harm. They raised their head and wanted me to stay and not leave. Next day the boys wanted me to teach them, I got a job without meaning too.

Then there was a five year old crying for his mother. It was his first day in a boarding school, the matron was not ready to make any allowance for him because of his age. She just treated him as one of the students.

I couldn’t bear to see him so distraught,I took him aside and told him he’s free to come with me and watch what I was doing. It took him only a few days to adjust.

These are a few things I did when I started my job as a teacher. Although I passed my education degree, I do not recall being told how to handle kids.

I mainly taught nine year old kids. I enjoyed teaching them,there were times they’d look at me with the expression ‘you are a teacher, you are not supposed to be happy!’ there was an announcement on the intercom,the school will be closed after noon hours due to the snowstorm. The kids were delighted and were raising their arm and shouting hey, I joined with them,when they saw me suddenly they were quiet, all eyes were on me. One of them said,’but you are a teacher you’re not supposed to be happy?’

I grew up in a family of twelve kids, we enjoyed every minute of growing up. There was a break when my Dad passed away. Things were not the same anymore. We forgot to laugh,have fun.

To me my legacy would be the way I handled my kids for I hope they remember me as a teacher who tried to make things fun for them. Money,furniture all these things are material things  and  they really don’t have much value when compared with affection a kind word, this is what I’d leave behind.

This would be my legacy, small as it may seem now, but I give  a lot of importance to it. 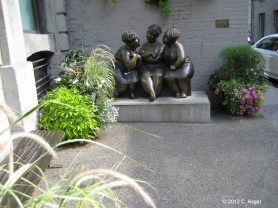 These are three ladies having an interesting conversation.These are statues in front of the building.

There are many things, I love about myself. I feel happy when I help someone,it can be work, cook, baby sitting, I do not like seeing anyone having trouble with these things. Of course it has to be within my means. I am friendly and polite.

I love a kind person,one who feels for someone in need. One who is helpful and not critical. Someone who shows affection. I love people who are happy. I love the kind of person,who makes me feel important and someone who is pleased to have me as a friend.