What was the last thing you searched for online? Why were you looking for it?

Yesterday I told my friend our Siamese and Himalayan breed felines chew plastic and paper. I didn’t know why they do this because they get the best food to eat.

My friend suggested I should look up at the internet. I came home and searched the internet where they gave a few reasons why the felines chew plastic and paper.

One of the things was they might be anemic or they were taken off too early from weaning, they suggested taking them to the vet. They also said there probably is no reason, they just  like to chew plastic and paper.

I’m worried because chewing and or eating plastic may harm the felines.

Whether a person,a pet, an object or a place , write about something or someone you connected with from the very first second.

About a year ago, my daughter and I decided to adopt a kitten. It is a beautiful Siamese and Himalayan breed .When we got the feline ,he was only six weeks old.

I remember it was a Sunday,my daughter brought him home. He was a very scared feline,next day my daughter went to work, I was curious, I went to check how he was coping.I was concerned when I didn’t find him in the room.I knew he was too scared and little to move.

I picked the covers, there he was with his paws folded trying to make himself smaller. I picked him up and brought him down to my room.

I had some emails to reply to , I laid him on my bed he was insecure he meowed quietly. I felt guilty picked him up and wrote my email with him on my lap.

We named him Gabriel, even after a week he didn’t settle in, we then made up our mind to get his brother who was the  same age as him. His personality changed dramatically , his brother was feeling insecure, he licked his brother, showed his brother the stairs, but the brother was afraid to climb up.

Gabriel led him towards the stairs and went couple of stairs to show him how to go up, it took them both only a few days to adjust. We named the second one Raphael.

They are very happy, they turned a year old on February 25th. For me and my daughter it was ” Love At First Sight!” 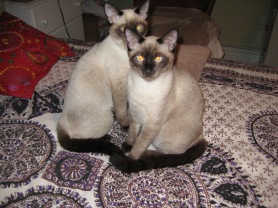 You are receiving an award–either one that already exists, or a new one created just for you. What would the award be, why are you being honored,and what would you say in your acceptance speech?

Right now I’d probably like to get an award for the kindness we show towards our two adorable Siamese+Himalayan breed cats.

Let me tell you it’s not easy to get their approval day in and day out. They do not appreciate us because we give them the best food in the market , it has to be more than this, we must regularly clean their litter, give them some private time when they like to cuddle each other. We humans are only allowed to watch them and tell them how lovely they are.

They give us time too, we have to play with them when they want to and continue as long as they think it’s worthwhile to them.

Everything in the house belongs to them, if we try to tell them, “No it’s not.”

They let us know we are wrong by the pitch of their Meoow, so we say okay it’s yours but do not take it apart.

Raphael and Gabriel keeps us on our toes!

I took the photograph of our Siamese- Himalayan breed kittens a few days ago. They are from the same litter and they get along very well.

That particular day both were having their catnap, they looked so cute hugging each other, I had to get my camera to take a picture, it had to be done quick they do not stay in one position for too long, maybe about five minutes.

They have a marvelous sense of hearing, a minute ago I thought I heard one of them I wasn’t sure, sure enough the other one jumped out of bed and has gone to investigate why his brother is meowing.

This is not the picture I took a few days ago, this is the one I took several months ago.Raphael and Gabriel are sitting and watching me.

Over the week end, we explored different ways to love.Today tell us about the most unconventional love in your life.

Two weeks ago we bought a Siamese Himalayan breed kitten. My daughter and I were very happy, the little kitten was very nervous, on the first day,it didn’t eat or drink,next day it hid under the quilt, it didn’t come out. Almost a week went by we couldn’t make it comfortable.

My daughter and I decided to get its brother from the woman, as soon as it saw its brother, it’s whole temperament changed,it was no longer the shy scared kitten.

I love them,we named the first one Gabriel and his brother Raphael. Gabriel and Raphael are the most important members of our family.

Three weeks ago I didn’t think we’d ever get kittens. Today we have them and are very pleased.