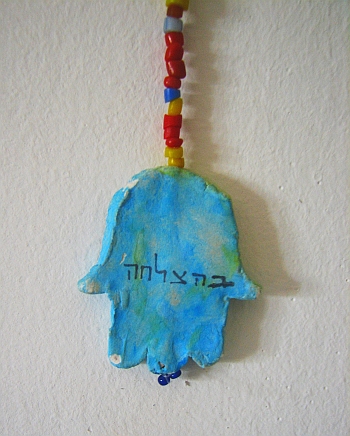 Clay Hamsa on a wall believed to protect inhabitants from harm.

I must not cut my nails in the evening

Warns my  elders which sounds threatening

It is an unfounded fear

You’ll be penniless my dear

So why  take a chance after knowing the meaning!

After my marriage I went to spend some time in my in-law’s house. While there I noticed my mother-in-law paid the hawker money for his produce, after receiving the money the man was about to leave out the same door he came in, she stopped him and said, ‘Use the other door.’

Curious me had to know why, she gave me a look of bewilderment as if to say, ‘You don’t know?’

Well I didn’t, she said it will bring her bad luck. It got me thinking what if they only had one door? Ha Ha

I of course told my daughter she must not cut her nails after sunset.

I told her she’d become poor, whenever I see her rushing to cut her nails before sunset, I can’t help but laugh.

Superstition is an irrational belief or practice resulting from ignorance. The other day I watched a movie in which a woman died of childbirth.No one tried to find out why the woman died,their belief was she died because the girl born to this woman,is unlucky.There are many causes of death in childbirth,the process of delivery,the physician who looked after could have done something wrong.The woman had some kind of disease like cancer.Nothing was taken into account,but the friends,families and neighbours of the deceased immediately blamed the baby girl,they were certain she was unlucky.The result was she and her father were ostracized. No one visited them.The poor child could not play with any one.She grew up believing she really was unlucky therefore she should end her life. This kind of belief destroys a person and the family.

I have experienced some superstitious beliefs by my parents.Every morning,my Mom used to wake up and made sure she saw my face first before she prayed and started the chores in the house.

One day my Dad came home from the office.He was furious with our servant because he opened the door and my Dad saw his face first thing in the morning.According to him,everything went wrong in the office.He called me and said, ‘Ma Ranu ,can you open the door in the morning?’ Let me explain about opening the door.During the summer months,because it was exceptionally hot inside the house,we used to take our bed and bedding to sleep in the verandah. All the doors therefore were closed from inside,but there was one door we used to lock from the outside.This was the job of the servant. Anyway I was assigned to open the door,I was considered lucky,so who better to be in-charge of the door,but me.

Not that I minded doing this easy chore,but it was getting ridiculous.My younger sister wrote her high school exams,the results were due to come out the following morning. She wanted to see my face when she woke up.My sister was a terrible student,I knew there is no way she is going to pass the exam. and she would blame me,I seriously prayed and asked God to help me. Talk about ‘Divine ‘ help I could not believe how things turned out for me. For some very important reason I had to go to Dhaka.I wasn’t home when the results came out. My sister failed,she couldn’t blame me for her failure.I thanked God for His help.