When was the last time you really wanted( or needed )to say something, but kept quiet? Write a post about what you should’ve said.

Yesterday we went to watch live tennis, we bought our tickets in June. The day started with rain, I’m an optimist and told myself, well we still have time the skies will clear out and we will watch the match. It wasn’t our lucky day. The rain kept falling. I was tired of standing around, trying to stay dry. My daughter realized our tickets allows us to go to the lounge in case of inclement weather.

We went on the hunt looking for the lounge after about ten minutes we found the place, we walked in ,there were people sitting at tables,there were four chairs in each of these places, the ones who occupied the tables reserved two chairs for their bags and the other two for themselves to sit on.

I totally understand these people sitting on chairs which is exactly what one must do, I failed to comprehend why the other two vacant chairs were filled by their bags.Everywhere I turned around it was the same story.I wanted to let them know how mean they were,  I didn’t, I went all the way from St. John’s to Montreal to watch live tennis not to argue about lack of decency on the part of these so called hot shot elites.

I moved on further, I found a man sitting at a table with three vacant chairs, I was exhausted at that point, I built enough courage to ask him, if he was holding those chairs for someone. “No, he said you can sit on these two, but I’m holding one for my wife.”

I was glad I spoke or else, no one would offer. 🙂 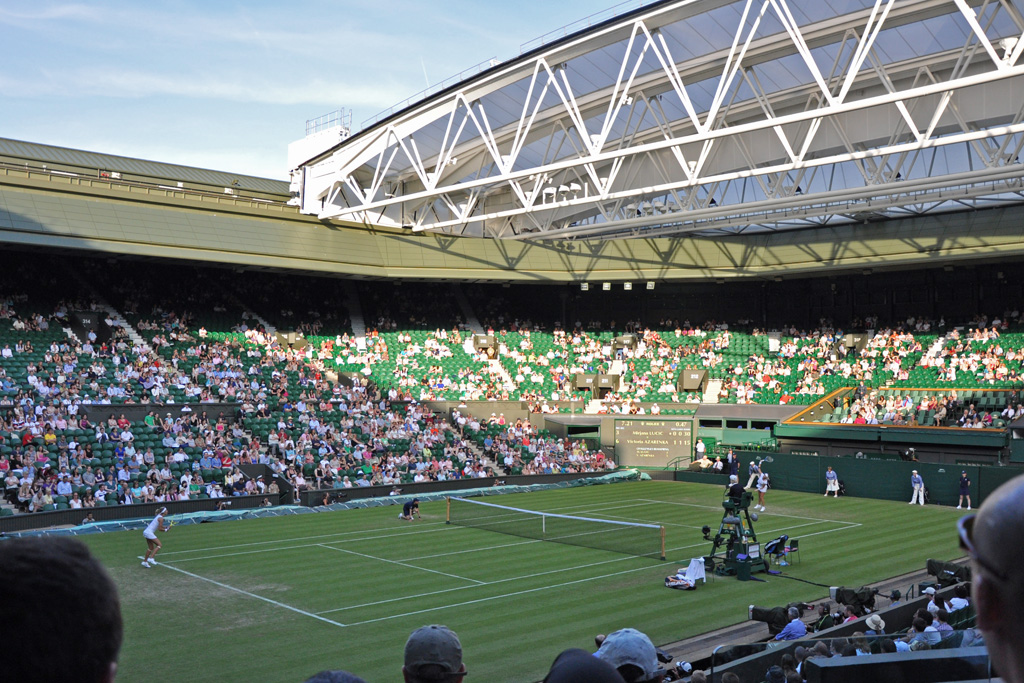 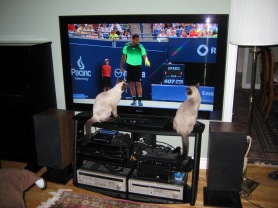 Our cats Gabriel and Rafael are watching US open tennis 2014. It is a grand slam tennis tournament, held in Flushing Meadows in New York.

They became interested when they saw Joe Wilfrid Tsonga bouncing the yellow ball. They were fascinated by the bouncing ball and thought they could get it.

I took a picture of them when they were watching the match.

Raphael is sitting on the right and Gabriel is on the left.

Team USA is playing today in the soccer world cup in Brazil. Do you have any funny/harrowing/interesting memories from a sporting event you attended, participated in, or watched?

Last year my daughter and I watched an ATP 1000, tennis match in Montreal,Canada. If my memory is correct, it was a men’s match, two Canadian players were in the semi final and final matches. Nadal played the final against Milos Raonic.

Milos lost the match, I know Milos is a good player, against Nadal he was unable to play well. I guess poor Milos lacked experience and Nadal took full advantage of it.